This post is a follow-up to yesterday’s (did you notice the date?) that looked at an April 1981 paper by Dietmar Seyferth and James J. Pudvin published in the (now defunct) ACS journal CHEMTECH. This article reports the isolation of vacant 3d orbitals when tetramethylsilane is pyrolysed at temperatures in excess of 2,000 °C. Although a spoof, the paper is written so well, and with such attention to detail (the authors even include the supplier name and catalogue number for the ultrapure silicon tetrachloride that they supposedly used in their experiments), that the joke is not immediately obvious.

As I said yesterday, I’d never heard of the paper until Scott Denmark told me about it — and he was also the one who kindly provided me a copy (I doubt even #icanhazpdf would have worked for this one). I’ve had it sitting as an e-mail attachment for quite a while, but I figured the time had come to write about it — and looking at the calendar yesterday, I couldn’t resist. When putting the post together, however, I figured I would do a little more digging and see what else I could find out related to the article, and this post is the result.

Although there are two authors listed on the paper, only one of them is real — and that’s Seyferth. Seyferth was the founding Editor-in-Chief of the ACS journal Organometallics and served in that position from the very first issue in January 1982 until 2010. In 2010, a special issue of Organometallics was published in honour of Seyferth (the Seyferth Festschrift) which featured an autobiographical essay entitled, ‘Looking Back on Happy Years in Chemistry‘. This 34-page article is remarkable in many ways, not least because the last 27 pages contain Seyferth’s detailed curriculum vitae (including full publication list)!

There are some interesting stories in the first 7 pages, however, not least the one about the Seyferth template (which ‘sold well for a number of years but ultimately was done in by ChemDraw’), but also one describing the story behind the CHEMTECH paper I blogged about yesterday — I reproduce that passage here:

Not all of my writings have been serious in nature. No. 353 in my publication list has the innocuous title “The Generation of a Highly Reactive Intermediate in the High-Temperature Pyrolysis of Tetramethylsilane” but really is a spoof in which I, with a fictitious coauthor, J. J. Pudvin, report the isolation and reactions of pure silicon 3d orbitals. I presented this orally at an organosilicon conference at Iowa State University in 1975 to the great amusement of my audience. Then there also is the only partly published (anonymously, without my knowledge, in CHEMTECH) “Researchmanship, Or How to Get Your Ph.D. Without Actually Working”, written in my younger years and modeled on Stephen Potter’s Gamesmanship, Lifesmanship, and One-upmanship books which were very popular at Harvard in the 1950s. Here J. J. Pudvin made his first appearance.

Using my highly advanced Internet-searching techniques (OK, I Googled it), I managed to find what claims to be the text of that other piece in which Pudvin first sprang into existence — it’s well worth a read too. Other anecdotes about Seyferth can be found on this webpage that lists the faculty members in the department of chemistry at MIT during the time that the class of 1964 were there. I particularly like this one:

When one of the new scholars asked him [Seyferth] how long it took a student to complete a Ph.D. in his research group, the answer was “The bad students — three years; the good ones — five.”

Anyway, back to the CHEMTECH paper and those 3d orbitals. Checking on Web of Science, the paper has apparently been cited just the once, but I’m not sure if the authors citing it are aware of just what they are citing… here’s the relevant passage in the citing paper (the bit in red is the reference to the CHEMTECH article).

There’s also a mention of Seyferth’s paper in the book Organic Chemistry: The Name Game: Modern Coined Terms and Their Origins in the context of other spoof chemistry articles (most of which are in German it turns out). By the power of Google Books, you should be able find large chunks of the book here.

Another interesting part of putting together yesterday’s post was learning about CHEMTECH, an ACS publication that I had never heard of before being told about the Seyferth paper. It was launched in 1971 and ceased to be in 2001 (the last issue of CHEMTECH was actually published in December of 1999, but it re-emerged in 2000 as Chemical Innovation — although that only lasted until December 2001). The editorial in the last-ever issue spells out the reason for its demise:

If you are a subscriber or a reader of the ACS news department in Chemical & Engineering News, you already know that CI is closing shop. In these times of slow economy and greater attention to the bottom line, it was almost inevitable. Even the redesign and renaming of this magazine 2 years ago couldn’t reverse the decline in subscriptions, especially the institutional subscriptions that are necessary to keep a magazine like this afloat. So we take our leave. In the spirit of Rodgers and Hammerstein, I can say that all of my memories are happy tonight. 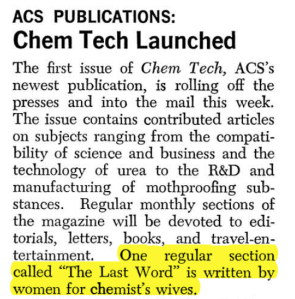 I beg your pardon.

As with the launch of many new chemistry publications, the arrival of CHEMTECH (or Chemical Technology as was its official title back then) was heralded in the pages of Chemical & Engineering News. I’m sure that the ‘technology of urea’ and ‘the R&D and manufacturing of mothproofing substances’ would prove to be fascinating, but something else included in the description of what this new publication was going to cover was something that you wouldn’t (and shouldn’t) see today (that said, it wasn’t appropriate back in 1971 either). Just in case you were wondering, I’ve highlighted in yellow the offending bit in the passage I’ve grabbed from the pdf… yikes.

1 Response to A silicon spoof