I did a Nobel thing…

It’s difficult to make predictions, especially about the future – so said Niels Bohr (or maybe Yogi Berra, or Mark Twain or… boy, it’s hard to track down who *really* said something…).

Anyway, @carmendrahl and @laurenkwolf from @cenmag were kind enough to invite me to join a Hangout with @NeilWithers from @ChemistryWorld, David Pendlebury from @ThomsonReuters and @lilaguterman from @ScienceNews. It was hugely enjoyable and here’s the end result:

In the lead-up to the Hangout I figured I should put some thought into who I was going to name as my 2014 pick for the prize – I ended up with two pages of notes… (the scribbled-out stuff at the bottom of page 2 are notes that I made in the few minutes prior to the Hangout going live). 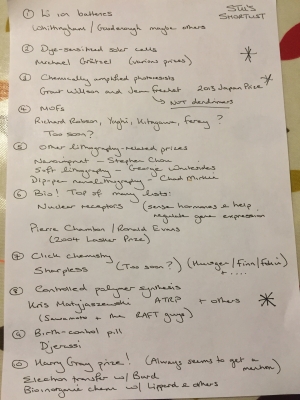 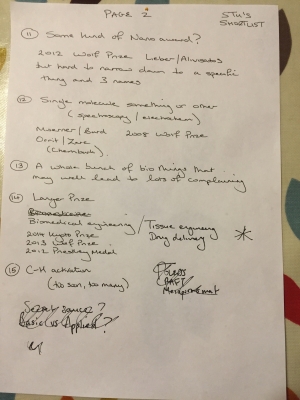 As I was trying to whittle down my shortlist to one particular pick, I put asterisks next to the ones that I liked the look of more than the others (I didn’t bother putting one next to Goodenough because I knew that this would be Neil’s choice). And when put on the spot by Carmen, I plumped for Grätzel…

The Hangout prompted a number of questions and comments on Twitter (you can find them by searching for #chemnobel), but here’s my favourite response to the 2-page shortlist that I’d put together.

And as Nobel-week begins, Rudy Baum (@cenbaum) has penned an editorial that rounds-up everyone’s picks from the Hangout. Come Wednesday, we’ll know if any of us got lucky and picked the winner!

1 Response to I did a Nobel thing…