There’s a new paper out in PLOS One called A systematic identification and analysis of scientists on Twitter – yay! Being a big fan of science and Twitter, this sounds good. Unfortunately, I became aware of the paper because @Teachforaliving mentioned me in a thread on Twitter pointing out that chemists don’t feature all that prominently in the paper.

The introduction to the paper includes the following paragraph, with some fairly bold claims in it:

Here we present the first large-scale and systematic study of scientists across many disciplines on Twitter. As our method does not rely on external bibliographic databases and is capable of identifying any user types that are captured in Twitter list, it can be adapted to identify other types of stakeholders, occupations, and entities. Our study serves as a basic building block to study scholarly communication on Twitter and the broader impact of altmetrics.

The study makes a big deal of the fact that it finds scientists directly on Twitter by looking at the names of Twitter lists (rather than identifying scientists outside of Twitter and then using them as a starting point to build up a network of scientists that are on Twitter). The sampling method leads to the identification of 110,708 users included in 4,920 lists that contain recognized scientist titles in the list names. This sample is then refined by looking for scientist titles in the profile descriptions of the individual users and this gives a dataset of 45,867 scientists.

These are the top scientist titles from profile descriptions (Table S2 in the paper) – I’ve added the highlighting. 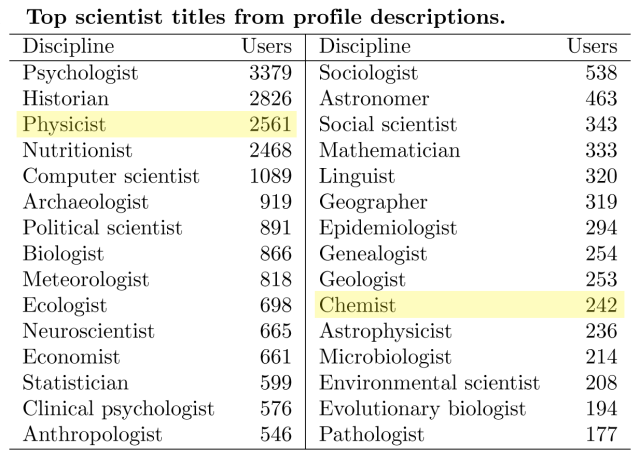 And these are the top scientist titles from the names of the Twitter lists (Table S3 in the paper) – again, I’ve added the highlighting.

Those numbers for chemists don’t look all that big to me (and others have said so on Twitter too). And if the sample identified in this paper is representative of Twitter as a whole, it means that there are something like 10-20 times more physicists on Twitter than there are chemists. (I’ve chosen to compare physics and chemistry because they are both traditional core scientific subjects, but admittedly that’s about as rigorous as my analysis gets).

My analysis is far from scientific, but I figured I’d look at some other numbers… specifically follower totals (all correct as of April 14, 2017) for some accounts. Now, there are many reasons why any given account on Twitter has the number of followers that it does (bots, activity, awesomeness, other random stuff), but consider the following:

How about UK scholarly societies?

So sure, the physicists seem to have the upper hand in the UK, but now take a look at the US:

That’s closer. Now, how about their flagship journals?

And how about we pit these two against each other:

Of course, it is not just chemists following the chemistry-related accounts and not just physicists following the physics-related accounts, but if there were an order of magnitude more physicists on Twitter than chemists, I think I would expect this to be reflected in the physics accounts listed above having, in general, larger numbers of followers than the corresponding chemistry accounts. Based on my totally unscientific survey of a small number of accounts, I would hazard a guess that the numbers of physicists and chemists on Twitter are not as different as the PLOS One study suggests. So, does the study overestimate physicists or underestimate chemists? Either way, my confidence in the study is not terribly high.

I’ve curated two lists here on this blog (totalling 199 chemists – was 200, but hey) and I have another list on Twitter that includes more than 300 chemists, so that’s well over 500 chemists in total. Also bear in mind the quite active #RealTimeChem hashtag (and the @RealTimeChem account itself). And for an example of the scale at which chemists interact with Twitter, check out the recent #RSCPoster event, for which the numbers are quite impressive.

The chemists are there on Twitter, perhaps some people just need to look a bit harder to find them.

This entry was posted in Metrics-y stuff, Random and tagged chemistry, chemtweeps, plos one, twitter. Bookmark the permalink.