Apologies for the lack of posting here. I’ve always been impressed with the output on a lot of the chemistry blogs that I peruse, but since starting this blog I now have an even deeper sense of wonder and awe at how some people manage to put out interesting blog posts day after day. 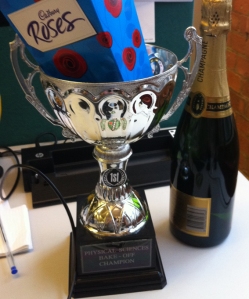 Now, let me tell you about the Nature Physical Sciences Bake-Off — mostly because I won the second running of this competition(!), but also because it involves some (kitchen) chemistry.

The physical sciences department at NPG includes the publishing, editorial and production staff associated with the physical science journals, namely Nature X, where X = Materials, Physics, Nanotechnology, Chemistry, Geoscience, Climate Change and Photonics. Not everyone on these teams is based in London, but many of us are.

The first bake-off was last year, and it focused on cakes. Each week, two people from the physical sciences department (drawn at random) would go head-to-head by baking a cake and bringing it into the office on a Friday. At 3 pm, an e-mail would go around announcing that the cakes had been cut and everyone should go and try some of each. This is a great way to finish off a Friday afternoon.

After everyone retired to their desks, we would be asked to vote, by e-mail, for the best cake. And to ensure maximum fairness in the peer-review process, we would not know who had baked which cake. Once the votes were counted, the winner was announced and they would progress to the next round to do battle once more, and so on. More than 30 people took part and so there were quite a few rounds before the final. I was knocked out in round 2 (thanks Gav) and so was spared more baking duty. 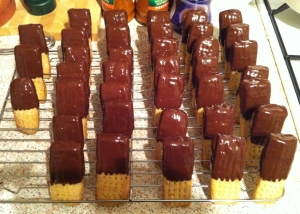 This year, the bake-off tackled biscuits (or cookies for any American readers out there). I made some almond butter biscuits (straight from a recipe book) for round 1, narrowly beating the Chief Editor of Nature Physics and went through to round 2. Here I improvised a little and made some chocolate-dipped orange shortbread (see pic), which seemed to go down well and so I progressed to round 3. Here, we started baking in threes to make the competition go a little quicker, and these ginger biscuits won the day. (Note: I had to use much more flour than listed in the recipe, after adding what was listed, I still had a soupy mixture — rather than a dough — that certainly couldn’t be rolled into balls).

Round 4 was the semi-final and I think we were back to baking in pairs. After liking how the ginger biscuits worked out in the previous round, I thought I’d do a variation on that theme and found this recipe for chocolate-chip ginger nuts. No need to play around with this recipe, it worked a treat and the biscuits were well received once more and I made it through to the final. My opponent for the final, Cecilia, was the current holder of the bake-off trophy (yes, there is a trophy) after winning the cake competition the year before.

So, what was I going to make for the final? I figured that it needed to be something special. Well, we had recently featured ($) in the Blogroll section of Nature Chemistry a blog post by Deborah Blum at Speakeasy Science about chocolate chip cookies. After she’d put so much effort into perfecting her recipe, I thought I would give it a go! I modified it slightly by adding some orange essence (why don’t you get orange chocolate chip cookies?!), and for any non-US readers, below is the recipe from Deborah’s blog translated into UK measurements/ingredients.

Cream the butter and sugar, then add in the eggs one-by-one and beat after each addition. Add in the vanilla and orange essence and stir into the mixture. Sieve in the flour/salt/bicarbonate of soda mixture and mix well before stirring in the chocolate chunks. Leave the mixture to chill for 30 minutes (I did this outside the back door but the fridge should be fine). Deposit heaped teaspoons of the dough on to a baking sheet leaving plenty of space for the cookies to spread. There’s so much butter in the recipe, I certainly didn’t need to grease the baking sheet. And I had to cook them for longer than specified in Deborah’s recipe; my best results came from baking them for exactly 12 minutes at 180 deg C in a fan oven. Leave them to cool on wire racks and then devour.

And so the day of the final dawned — and my slightly orangey choc chunk cookies won the day! So, thanks to Deborah for a great recipe and thanks to chemistry for being so delicious!